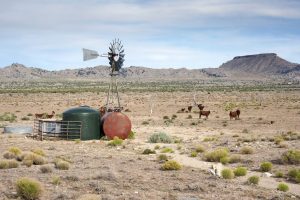 In the desert, June is hotter than July or August. When I lived on Lazy B, we always started looking for clouds and rain around July 4th, and we were eager to have some by then after living through the heat of June.

There was one day that I recall being the hottest. We had a new BLM range conservationist, Frank Hayes, who worked out of the Safford office. Young and cocky, Frank didn’t have much experience, but loved the process of understanding grazing, grass, and land and was anxious to make a name for himself as a good range con.

One day Frank called. “Alan, I want you to round up the cattle and move them to High Lonesome Pasture,” he said. “We’ll rest the East Pasture for six months.”

I agreed the pasture needed resting. “But the calves are quite young,” I countered, “and still recovering from the shock of branding. They don’t have much energy right now. And it’s too hot. If we wait until rain starts, it’ll be a better time. “

“No, we have to do it now,” said Frank, flexing his authority.

I knew in theory he was correct; in practicality, however, it was the wrong time to make the move. But you only learn things like that through years of experience out on the range, not in your chair in the BLM office. After unsuccessfully trying to persuade Frank to postpone the move, I said, “Okay, I’ll move the cattle one condition. You need to come out and help.”

On the given day, we set out at 3:30 am. We had about eight cowboys including Jay O’Connor, my nephew and Sandra’s youngest son, who was quite interested in the ranch but had a pretty smart mouth. The East Pasture was quite large, so we spread out and started rounding up the cattle. By 11 am, we began the drive toward High Lonesome.

The temperature topped one hundred degrees. No clouds floated above us, no shade spread below us. The cattle plodded along, their pace growing slower and slower until finally they just quit. We could maybe prod a cow to move ten steps, but then she’d stop. We had reached Horseshoe Tank, which was bone dry. At least the cook had arrived in the pick up with our lunch.

We got off our horses and let them stand. They had no interest in moving. There wasn’t a tree in sight. After we guzzled some cold water, the eight of us crawled underneath the pickup. We were too hot to eat. For about an hour, everybody laid in any small scrap of shade they could claim. At least the sun wasn’t beating down on our faces. Had the pickup been parked there all day, the ground would’ve been cool, but it wasn’t. It was hot. We were hot. We just laid there as still as the cows, unable to move or speak.

Finally, Jay turned to Frank and said, “How does this feel, Frank? Do you feel pretty smart now?”

I was mortified. Was Jay repeating what I had said? Probably. At the same time, I was proud of Jay for saying the obvious.

After an hour, I rallied the group to finish the last mile and half. We got the cows and calves moving and drove them to High Lonesome. They appreciated the fresh water and fresh feed.

It was one helluva a hot day to teach a lesson. Then again, the lesson couldn’t have been taught without the hot day.