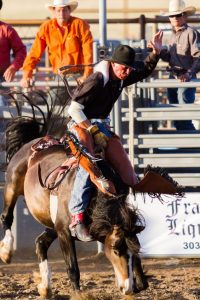 When you grow up on ranch riding horses almost every day, you’re no stranger to rodeos, by they in your own backyard or on the official circuit.

I shared my plans with our foreman, Leroy.
“Oh boy, that’s a good idea,” said Leroy. “But I might have a better idea for you.”
“What would that be?” I asked.

Leroy said, “Well, we have six young horses at High Lonesome. If you want, I’ll go over there with you, and we’ll catch one or two or three or four. I’ll put you on as many as you want. They’ll all buck you off. It’ll be ten dollars cheaper and there won’t be anyone to laugh at you.”

For a day or two, I thought about Leroy’s offer and finally concluded that it was a good one. From that point on, I restricted my getting bucked off to ranch horses.

That was Leroy. He’d never come out and say something was a dumb idea. But whatever he told you, made you think, “That’s a dumb idea.”

I suspect we all need a Leroy in our life now and then.